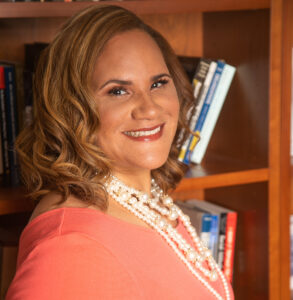 Tasha Philpot is a Professor of Government at the University of Texas at Austin.  She is also affiliated with the John L. Warfield Center for African and African American Studies and the Center for Women’s and Gender Studies.  She received her B.A. from Marquette University, her M.P.P. from the Gerald R. Ford School of Public Policy, and Ph.D. in Political Science from the University of Michigan.

Professor Philpot specializes in American Politics, with particular interests in African-American Politics, Political Psychology, Public Opinion and Political Behavior, Political Communication, and Political Parties. Her work has been supported by the National Science Foundation and has been published in The American Journal of Political Science, Journal of Black Studies, PS: Political Science and Politics, Political Behavior, Public Opinion Quarterly, National Political Science Review, and the Journal of Politics. In addition, she is the author of Race, Republicans, and the Return of the Party of Lincoln (2007, University of Michigan Press ), the co-editor of African-American Political Psychology: Identity, Opinion, and Action in the Post-Civil Rights Era (2010, with Ismail K. White, Palgrave Macmillan Press), and the author of Conservative but Not Republican: The Paradox of Party Identification and Ideology among African Americans (2017, Cambridge University Press).

Prof. Philpot is well-respected in her profession, winning a number of awards, including the WEB Dubois Outstanding Book Award in 2008 given by the National Conference of Black Political Scientists and the 2015 Silver Spurs Centennial Teaching Fellowship for promoting educational excellence.